Skip to content
Home
/
What are guayaberas and where did they originate?
August 20, 2019 by Alexis Martin 2 comments

The Guayabera shirts are very unique shirts, they were created in Cuba in the mid 1800’s.

Distinctive features of a Guayabera Shirt:

Where the style comes from?

Nobody knows for sure but guayaberas probably evolved from the Spanish army uniform worn in Cuba in the 1800’s.

Another story associated to this unique Cuban garment is one of a husband asking his wife to create a shirt to carry guavas (guayabas) hence the term Guayabera.

Its is known the guayabera shirt became a symbol of Cuba since the beginning. The guayabera was also one of the favorite shirts worn by Manuel Garcia a sort of Cuban Robin Hood that roamed the Cuban country side during those years.

Traditional Guayabera shirts have four pockets, made of linen and in long sleeves. This was a shirt worn for special events and celebrations.

The guayaberas were traditionally made of linen, however now days it is also manufactured on cotton blend and other fabrics. Linen is a thousand years old natural fabric.

The evolution of the guayabera.

Guayaberas had evolved throughout the years and they are now available in different styles, colors and fabrics.

The modern version of the guayabera shirt or guayabera inspired shirts can be simply untucked with or without pockets, with the guayabera pleats or embroidery down the front.

Pronunciation and spelling for guayaberas.

Its simply a consequence of the mispronunciation of the this Spanish word. What is the correct spelling? How to pronounce it correctly?

The right spelling is GUAYABERA , click the play button below for the right pronunciation.

Now days the guayabera shirts come in different fabrics each of them with its own characteristics and look.

Guayaberas are great at corporate events as the shirts can be embroidered with the company logo and they are perfect if your group or company is thinking on an event at Miami or any other tropical destination.

Guayaberas are different! You cant ignore them, you either like the style for what it is or you don’t. If you wear one of these shirts people will notice it, its a memorable shirt.

How do we know the Guayabera is from Cuba?

You went warrior like mambisa with more than one bloody button during the heroic uprising, and for that the flag is something of a guayabera that dresses the gallant of the wind.

It wanted you Camagüeyana the noble and brave Camagüey until the end, since the Cape  of San Antonio a Maisí,   Cuba isn’t dressed without you,  fresh wave of the Yayabo.

Here the author makes references to the Cuban uprising against Spain and the fact that was used attacking the Spanish fornications known as “trochas”.

This poem also talks about crucial battles of the war of independence and at the end mentions the Yayabo river, which the place from which is believe the shirt came from. Its believed the shirt was called “yayabera” initially.

Juan Cristobal makes clear reference to the guayabera and its unique characteristics such as the 4 pockets, its fresh style and what he call “happy buttons”.

Guayaberas are also available as priest or clerical shirts, these shirts will include the traditional tab collar found on priest shirts and the world famous guayabera style. This includes the four front pockets, the pleated lines and all other details so unique to the guayabera. You can find these clerical guayaberas in both long and short sleeve versions.

The guayabera shirts are more popular than ever today. From beach weddings to Havana night party celebrations these shirts are here to stay.

What is your opinion on the Guayaberas? Please comment below. 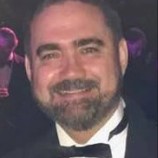 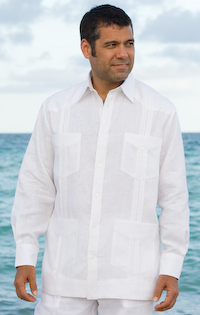 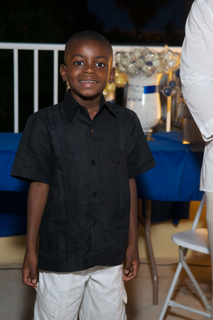