What is The Cuban Tocororo?

The Tocororo is known as the national bird of Cuba. Its call is nostalgic for many Cubans. In fact, the name comes from the noise they make. In English it's called the Cuban Trogon, it is a species of bird that is part of the 35 types of Trogon. Trogons and quetzals are found in warm, forested areas in North America, Central and South America, Asia, and Africa. 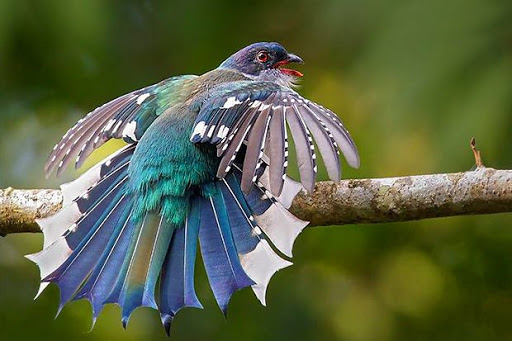 Cuban Trogon with its wings opened on a branch

The Cuban trogon is very colorful with a dark blue and green back, blue crown, red belly and beak, with white on its throat and chest. Its colors are similar to the ones on the Cuban flag, which is why it was chosen to be the national bird of Cuba. It has a long fluffy tail which is unique amongst trogons, it spikes out in a unique way when its wings open. They have a fast, staccato call that is actually the inspiration for their name. 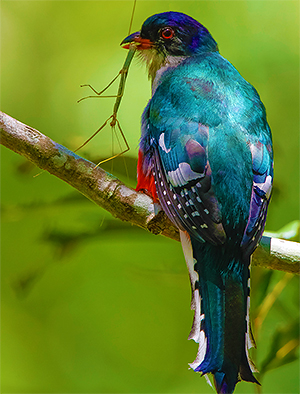 Adult Tocororos dine on nectar, fruits, berries, and insects in the forest. Parents feed their babies masticated versions of the same. The Cuban Trogon nests in tree cavities resulting from rot or abandoned woodpecker nests and lays three to four white eggs each spring. Both parents help feed and raise the babies. Unlike most other birds, they can hover mid-flight when feeding, flirting, or mating. They tend to group and fly in pairs issuing loud squawks when airborne. If distressed or in danger, they send out a stealthy call that can be impossible to locate.

Another interesting fact about these birds, is that they cannot live in captivity. It dies of sadness if caged, reflecting the Cuban people's unquenchable thirst for sovereignty and dignity. The health and well-being of trogons serve as a biological barometer of tropical forest integrity. Tocororos inhabit the entire main island and its thousands of surrounding islets. Their favorite habitat is woodland forests, near freshwater and dense areas with shrubbery to shade them from the hot, tropical sun.

Fortunately, in contrast to most endemic bird species in Cuba, the Tocororo is not endangered. It is estimated that there are about five thousand viable mating pairs. And the population declines at the rate of ten percent every ten years.